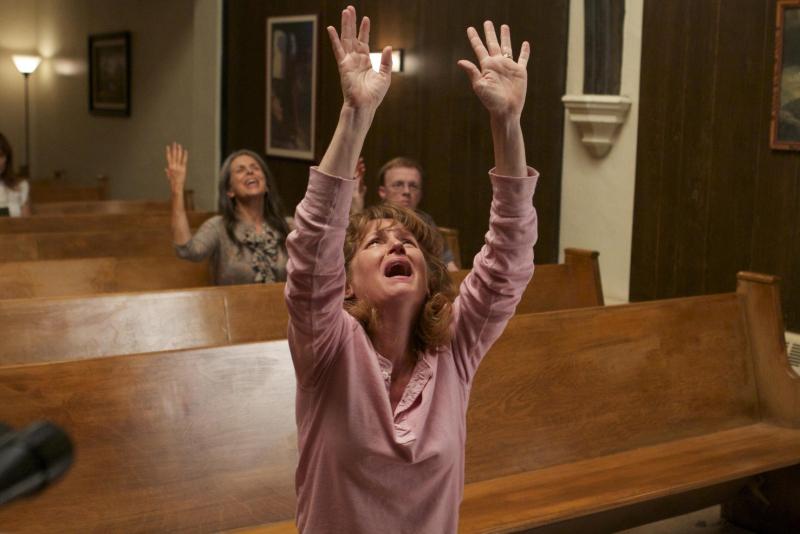 It takes an ultra-liberal Catholic like Kevin Smith to tear into Christian fundamentalism with Red State’s ferocious accuracy. The writer-director’s 10th is being sold as a horror film, but the only demons to be seen are those of church and state.

When his debut Clerks became a micro-budget paragon of independent cinema in 1994, Smith gently dismissed himself as “a 24-year-old with a talent for dick jokes”. In some subsequent films – Jay and Silent Bob Strike Back (2001), for instance – he’s seemed happy to live down to that, and massage his own cult. Red State is a radical change. An early scene in which three horny teenage boys respond to an ad for sex with a weird older woman offers a glimmer of the old obscene humour. But when the hopeful trio are drugged and pass out, and one wakes in a cage in the midst of a sermon by the local, gay-loathing church’s pastor Abin Cooper (Michael Parks), hysterical bedlam follows. 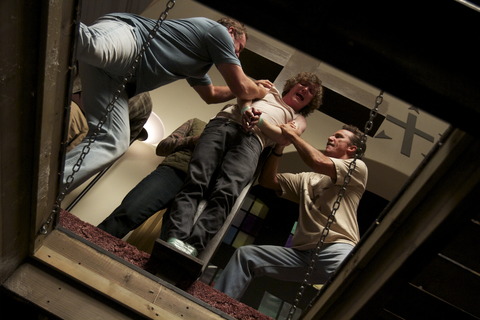 The veteran Parks is a persuasive preacher, with a silkily musical, mesmerising Southern voice, and a capering, simian, maybe demonic walk. He presents himself as a loving, all-powerful Father to a flock composed wholly of relatives, while plainly the tinpot dictator of a paranoid provincial sect. Smith’s initial inspiration, Kansas’s “Independent Baptist” Fred Phelps, the fanatically homophobic organiser of pickets of US soldiers’ funerals, is mentioned. But Cooper is his own monster of God, decorously ordering the compound’s children from the room before having a saran-wrapped gay prisoner shot and tossed into a charnel-house cellar.

Red State grinds gears in its second act, when the compound attracts the federal authorities, and a siege which chief agent Keenan – John Goodman (pictured below with Parks) – knows looks like ending in Waco-style slaughter. Goodman is always a welcome sight, chummily introduced to us at breakfast. But Keenan would rather keep his job and follow orders to leave no witnesses among these quickly reclassified Christian terrorists, cowering children included. The few innocents to be found in Red State find themselves to their surprise in an America with nowhere to turn. 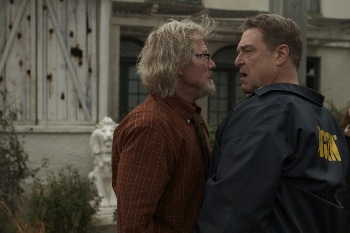 Smith didn’t have to look to Kansas for inspiration. His gay, church-going brother was subjected to months of hellfire homophobia back home in New Jersey, he told me in 1997. “It’s tough to sit in church and listen to somebody bash the ones you love…[but] my whole life is quite a great gift,” he explained. “And in return for all that, I go to church, and as soon as they start proselytising against something that I know in my heart to be right, I tune out.” The earnestly self-examining 27-year-old I met that day has since become a one-man industry of self-publicity, climaxing in a seemingly kamikaze performance at Sundance, where in front of Hollywood executives prospectively there to buy Red State, Smith sold it to himself to distribute, during a 20-minute diatribe against the system that sometimes feeds him.

That shouldn’t distract from Red State. With his regular cinematographer Dave Klein, Smith’s usual flatly uncinematic style has been hot-wired with frenetic energy, the frame jolting as the terror-stricken flee, and colour is leached to the jaundiced tones of Saw-style horror. The bravely unpredictable narrative weaves into a black hole where no moral authority remains.

Smith had intended a climax of literal apocalypse, recalling Ben Affleck and Matt Damon’s murderous angels in his Dogma (1999), where God was incarnated as Alanis Morissette. Instead a deflating coda turns the state’s viciousness especially into a tatty shaggy-dog tale. The panicked intensity dribbles away. It’s as if Smith loses faith in his own film.

Watch the trailer for Red State