One of the lessons we consistently learn from the makers and creators featured in We Made It is that necessity truly is the mother of invention. By negotiating their way around unfamiliar media and techniques, fighting against their limitations, and expressing creative urges by any means necessary, our subjects have as often as not pushed through into unexplored territories and found unique modes outside of standard categories.

This certainly goes for Tiff McGinnis, aka Grande Dame. Formerly the electro-rock one-woman-band Crazy Girl, her methods of expression have expanded into print, ceramics, textiles and more – often in combination – and smash apart ideas of “high” and “low” art. It’s day-glo bright, fed by a sense of Southern Gothic (she grew up in Georgia) and the aesthetics of trash movies, rock’n’roll and rave – but also full of religious iconography and deep delving into the unconscious mind.

JOE MUGGS: You cover ceramics, textiles, music and more. How do you introduce yourself?

GRANDE DAME: Just Grande Dame for everything. My friends call me Tiff.

Do you have any interest in categories of “high”, “low” or “pop” art, and where do you see yourself in relations to these ideas?

My tastes are quite wide! I guess all three interest me. I don’t follow art terms or trends. It’s all over my head really. As far as my interests, they are across the board. I love everything, from Folk Art, to Bosch, Raphael, to Sixties and Seventies black light art, comic book art – you name it.

How did your career kick off?

I fell into an art and design career by accident. I came to the UK in 2001 to pursue music. I didn’t have a budget to pay for videos, so I taught myself how to animate. The animation thing started gaining momentum and I began to produce more and more videos. Whenever I had a new one, I would send an email out with a jpeg still from the vid. People started saying, “If you print that I will buy it.” Over and over. So about five years ago I made my first prints from characters from The Shakes video (see below). Shortly thereafter, a friend who happens to curate shows for her work asked me if I would like an exhibition. I said to her, “Sorry, what’s an exhibition? I don’t know what that means, but I’m sure I can do it!” In 2012 I had my first show at the headquarters of PR company Ketchum Pleon in Spitalfields. And my career has taken off from there.

Where and how did you learn your craft(s)?

I have found YouTube tutorials quite handy! Ha! I am self-taught with most things I do, although I have taken a few silkscreen classes. I grew up in a very creative household. My mother always had arts and crafts projects going on that I helped out with. Lots of papier mâché & salt dough sculptures.

Who in the visual art world were your biggest influences in starting out?

Saint EOM (Eddie Owens Martin) has definitely been a massive influence on me. He was a very prolific folk artist from near where I grew up in Georgia. He spent the 1950s to the 1980s building this incredible compound called Pasaquan. Pasa from Spanish meaning “the past” and Quoyan (not sure of the exact origin) meaning “the future” – bringing the past to the future. The place sits on several acres of land and is an incredible psychedelic mecca of walls and buildings with signs and symbols from Atlantis and the lost civilization of Mu, to Judaism, Islam, Hindu, Christianity, Native American, African cultures and many more. He blended iconic symbols and traditions from many different religions into one. Mandala relief sculptures and snakes painted in bright colours line the fences that surround the compound. He was shunned by the art world when he was alive. He made his living as a fortune teller. It wasn’t until after his death that his work has become celebrated. Such a visionary on so many levels. I spent a lot of time there growing up. There are also lots of giant aliens in pressure point suits with their hair standing up. He followed the Sikh tradition of the braiding of the hair upwards and wrapping it in a turban. He believed that braiding your hair upwards would work as antenna to receive messages from the giant alien gods in outerspace. He was also working on pressure point suits that hit each chakra just right; he believed these suits would cause the wearer levitation. (Pictured below: Mothership Connection)

My late cousin Sean Earley was also a major influence on me. He was an illustrator for Penthouse, National Lampoon, Rolling Stone and more in the Seventies and Eighties. His work and attention to detail was absolutely mind-blowing. There was a cartoon look to his work, but he was a very serious painter and looked to many of the Renaissance masters for inspiration.

Your Deep South upbringing provides a lot of motifs for your work, but now you live in England’s deep south coast. How important is locality for you now?

Living by the seaside has allowed me to go further in my career and explore other artistic endeavours though. It’s calm here, I have more space. I can think more clearly. As far as a “visual influence” – not a huge importance. I don’t do seascape type paintings, seagull portraits, or driftwood scultpures. A lot of my work is drawn from childhood memories. My last solo show – My Voodoo on You – at ink-d gallery was really a tribute to my childhood. It was a five-year endeavour, starting with an album – most of the music was influenced by rhythm & blues, roots rock ‘n’ roll, twang, Americana and New Orleans marching band sounds, things I heard growing up. 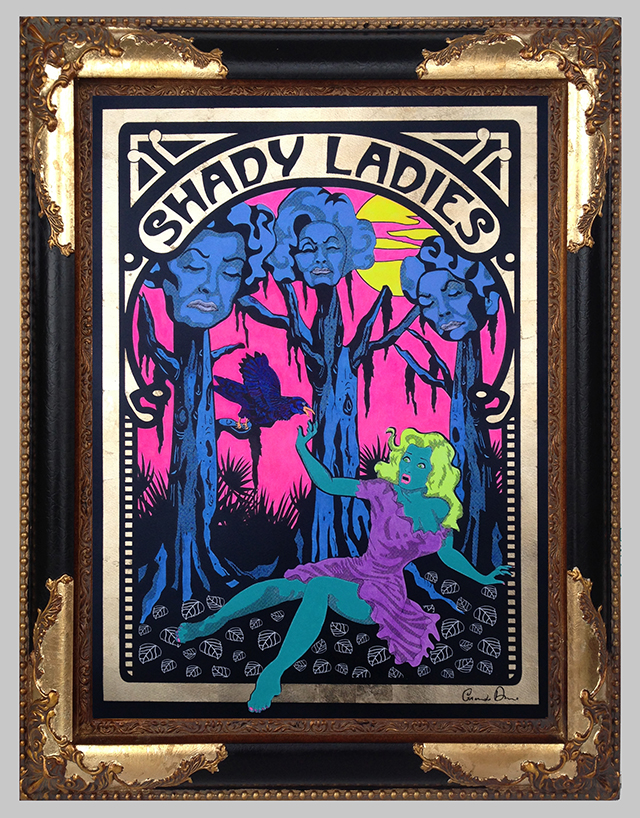 My animation style is a product of the cartoons I watched as a kid in the Seventies – Yellow Submarine, the work of Vince Collins, Schoolhouse Rock! etc. The majority of the artwork was, again, things I saw as a kid that left an impression on my young mind – the Movie Tommy, pinball, fire and brimstone signage and the voodoo mysticism dotted around Deep South landscape. My dad had a huge collection of girly mags. There were two issues I was obsessed with when I was little – Playboy May 1974 and Penthouse November 1976. The Devil in Miss Jones had just come out and occult soft core was in vogue. Naked ladies with bird heads dancing with devils and snakes, sacrificing chickens in front of fire pits. It really made a stamp on me. I saw it and thought to myself, that’s what I wanna do when I grow up! In fact after he died, I found those two issues and have kept them with me for references. (Pictured above right: Shady Ladies)

My mom had a colouring book calendar that I filled in and stared at a lot too – there was that whole Art Nouveau revival thing happening. And my dad sold blacklight posters at his hi-fi store. All those things I saw and experienced as a kid, stamped my style and taste and have stayed with me ever since.

Can you tell us a bit about your wider visual mythos? You take imagery and themes from many different sources but a few keep recurring.

Ninety percent of my work is from my animation. I have been animating since 2002 and have a library of thousands of images. I put so much detail into each drawing and most people never even watch them. Now with the internet age, attention spans are so miniscule. To ask someone for five minutes of their time to watch an animation is a major investment. So I take the images in the videos and create still art with them. That is instant and I seem to get a lot more feedback from that. 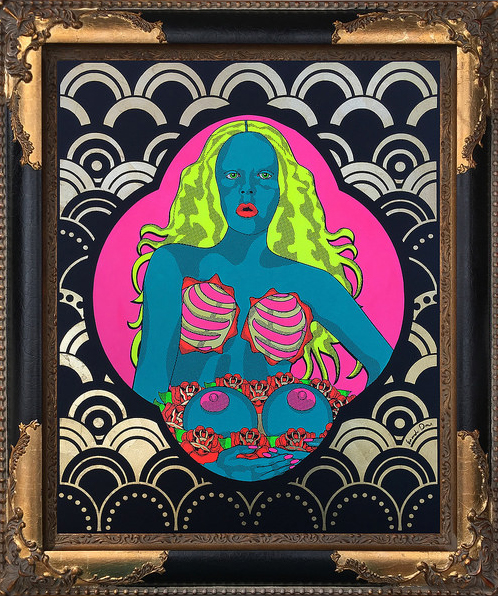 Religion and mythology appear in your work, as well as other influences from cultures worldwide. Do you have a particular focused approach to each strand of source material, or is just about what works visually?

No, I don’t have a focused approach, it depends on what I’m working on. I went to Catholic school for 12 years so saints and icons have always interested me, as have the religions and myths from other cultures. I don’t understand religion, but I love the art and creations it inspires. To me, I am a child of the earth. I am interested in all things, all lands, all cultures, Especially the ones with lots of colour. (Pictured above left: Saint Agatha)

Hand-making beautiful objects is “on trend” these days. Do you think this represents a genuine cultural shift, or just a fad?

I don’t see it as a trend or fad. When you make something by hand – you put magic, love, energy and raw emotion into it. It’s sacred and powerful. It always has been. There is more power in a handmade object than something mass produced. That will never go out of style.